Talk about that VOODOO, that You Do, Soooo Well!

We have had allot of questions about feeding Line Level Audio into the TS-950sdx ACC2 connector.
The main question was if there was a capacitor that you have to change out like on the TS-870.

Here is the answer:

Yes, you can input Line Level Audio into the ACC2 Connector, but it will roll off your Low Frequencies due to several low value (.1uf) coupling capacitors.
The C131 Mod for the TS-870 only changes one capacitor as that is all there is.
You will have to change out 2 capacitors on the TS-950sdx to accomplish the same thing.

You can install electrolytic caps, but we don't recommend them.
The best thing to install would be replacement XR7 Ceramic Chip caps in an 805 case in a 1uf value.

There is also another capacitor if you think you are not passing enough lows once changing C154 & C158.
This is capacitor C161, it is a 1uf. You would want to change this capacitor to a 4.7uf.

Here are some pictures of the capacitors on the IF Unit: 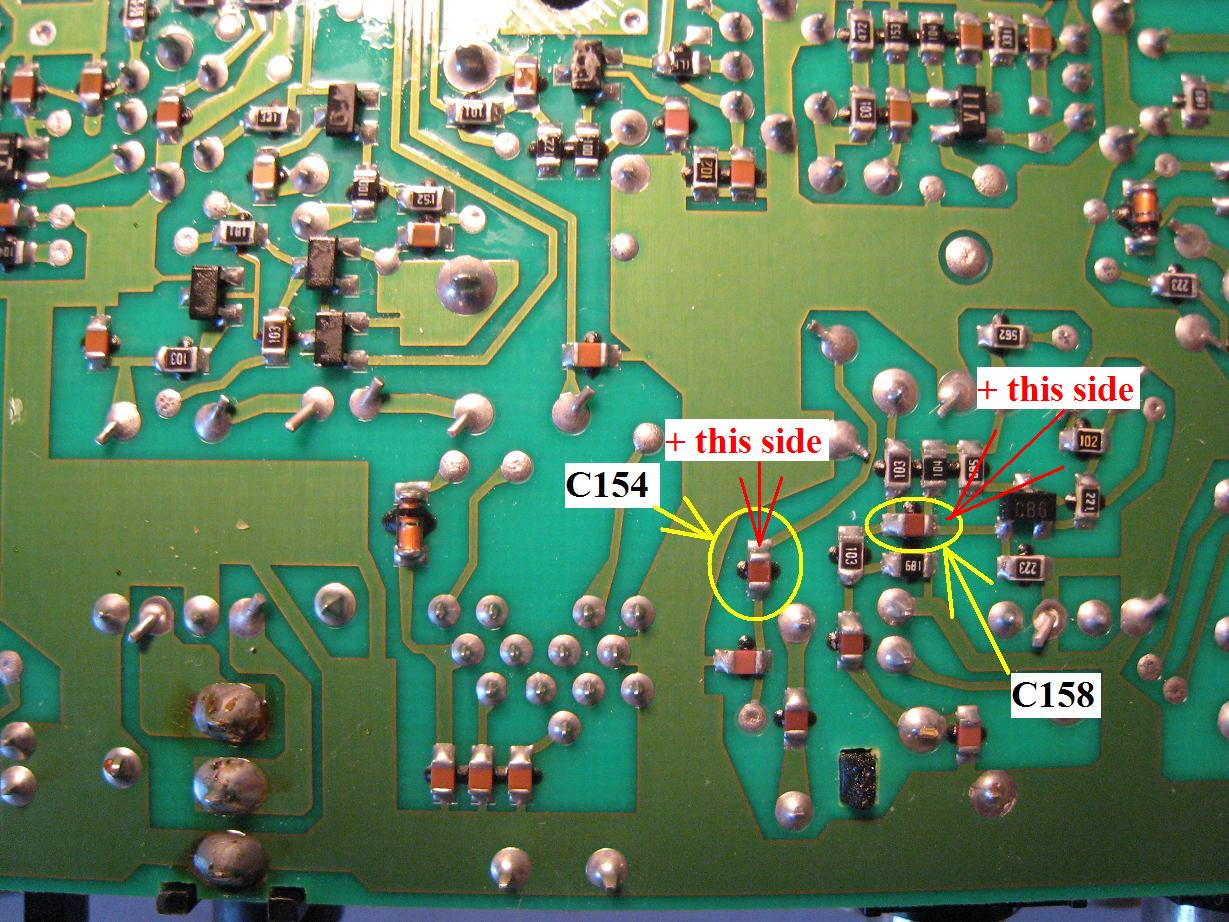 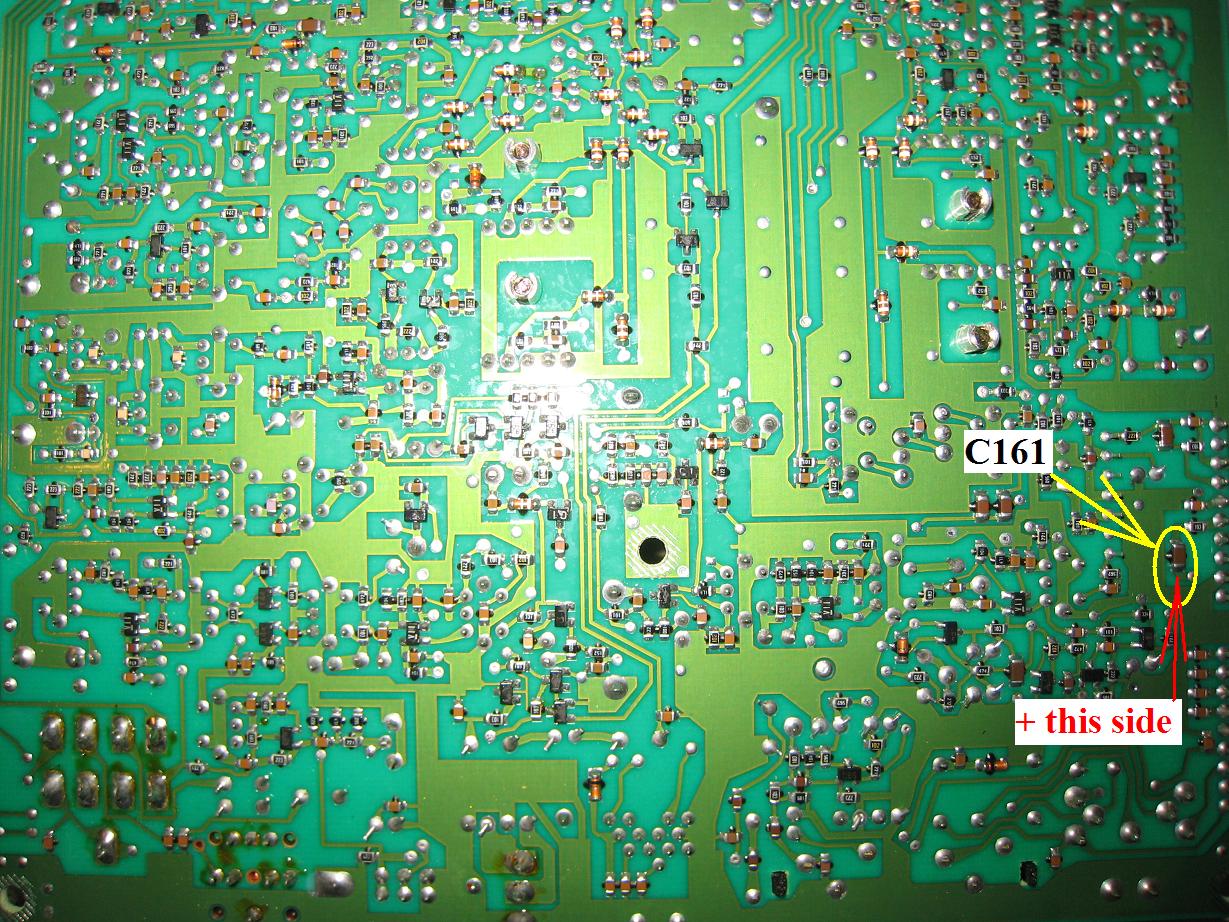 We haven't done this mod here, so there is no test data to tell you how much more Low Frequency you will get.
It should be quite allot more.

The Pins for the Line Level Audio input are Pins 11 and 12 (11 being the audio and 12 being the ground) and pins 9 and 8 for the PTT. The reason for the PTT is the audio is separate from the front so you need this separate ptt. (These pinouts are on page 20 of your SDX owners manual).

Hope this helps, let us all know how it works out for ya!
Take Care,
Voodoo Guru
From Deep in the IDD of the Sub-Harmonix Realm
Top

It should be noted that the above mod is only intended to provide a line level input, but not necessarily HiFi line level input. I decided to try this mod myself and discovered this first hand. If you only replace C154, C158 and C161 as described above, you end up with a low end roll-off that's still well above that of the mic input.

This appears to be mainly due to the emitter shunt capacitor C159 on the ACC2 buffer amp formed by Q42. It's 10uF, while the equivalent cap on the mic pre-amp (Q251) is 47uF. This causes the gain of the amplifier to roll off at lower frequencies. To shift the cutoff frequency down to an acceptable level, we need to increase C159 a lot.

Thus, I humbly suggest that the above modification be amended as follows:

Once these hardware mods have been performed, and before you slap the bottom cover back on the rig, you should also do the 12Kc LC filter adjustment that's documented here:

(The short story: you need to adjust L28 and/or L29 on the IF unit for loudest noise in the receiver. This should only take a minute to do.)

Note that in my case, I found some 4.7uF electrolytic caps small enough to fit under the IF unit, and I soldered them in parallel with the existing SMD chip caps. Doing it this way saves you from having to unsolder the old caps, which is difficult without proper tools.

Once the radio mods are complete, you'll need to interface your audio gear. The ACC2 port uses a 13-pin DIN connector. Several suppliers have these. I got mine here:

In my case, I took a spare 1/4" unbalanced patch cable, chopped off one end, and replaced it with the 13-pin DIN connector above. The audio line (tip) goes to pin 11, and the shield goes to pin 12.

Lastly, to connect balanced output of my audio rack to the unbalanced line level ACC2 audio input, I used this:

Note: if you're still not satisfied and want to "go deeper," then you can try the following:

The above unit has the same Jensen transformer that's recommended for the official TS-950SDX TX mod. The PRO ISO unit uses transformers made by Radial, which are actually quite good, but the Jensen ones are the gold standard. It's decidedly more expensive though. You can read the spec sheet for both of them here:

One more tip: when operating the radio using the ACC2 input, press the desired mode button twice. For example, if you want to operate in LSB mode, press the LSB button twice. On the second press, the 'DATA' indicator should light up in the display, and the mic input will be muted. I do this so that I can connect my MC-43 hand mic to the radio and use it as a hand switch without getting any pick-up from it.

In my opinion this mod results in audio response that's just as good as what you can achieve with the official TS-950SDX VooDoo TX mod, without requiring you do drill a hole in the back of the radio. The only down side is that the audio still passes through two transistor amp stages, which may offend the delicate sensibilities of those who prefer to use tubes to put the voo in their doo.

Howdy Bill,
Very good right up.
We appreciate the time you took to get that all lined out.
This should give those the alternative Not to drill a hole.

We like the hole because it makes it easy to hook up the balanced cable from the Rack to the TRS Connector in the rear of the rig. The Transformer is inside the rig so no worries having all kinds of extra stuff laying about.

We have had RFI issues using the ACC2 connectors and the unbalanced cables and external Balanced to Unbalanced transformers in the past, so to preclude anyone having problems we opted to do everything internal.

The other reason we decided to install the TRS in the Rear, is to be able to keep all the functions of the SDX intact. The ACC2 Audio input was intended for digital audio input and if someone wanted to go and play some JT65 or other digiwigi modes, it would be a simple thing to do as all the stock plugs will still work with the supplied connectors.

For those of you who are to 'scared' to drill the hole, all we can say is...

Take Care,
Voodoo Guru
From Deep in the IDD of the Sub-Harmonix Realm
Top
Post Reply
3 posts • Page 1 of 1